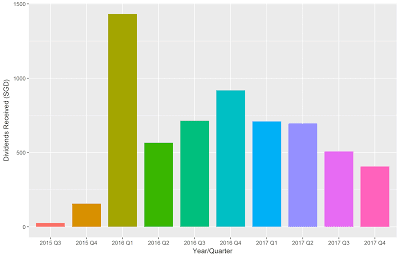 With the closing of the stock market for the year, it is time to compute the required statistics to measure my performance for the year. In this piece, I will review how I have fared as well as the strategy to employ for the new year.

Similar to what I have done previously, I will go through my dividend income first. For my SGD-denominated counters, the trend in dividends received pales in comparison to 2016. This could be attributed to the following reasons: (a) profit-taking on some of my counters in the earlier half of the year, (b) poor economic conditions leading to some counters delivering lower dividends, (c) delisting of yet another income counter (Croesus Retail Trust), and (d) delays in the declaration of distributions (RHT Health Trust). In 2018, I expect dividends to drop further.

In contrast, the dividend payout from my USD-denominated counters increased. This is primarily due