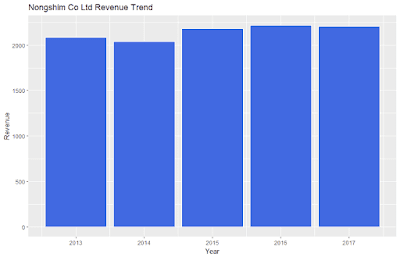 This post is inspired from a conversation I had with Jeremy Ow and Sysy on InvestingNote regarding consumer staples stocks. Nongshim is one among many instant noodles brands you can find on the shelves of supermarkets in Singapore. I have tried their instant noodles, but was unaware that they were a listed company until I stumbled upon the very same name being reflected on a list of Asian consumer staples stocks.

Let us take a look at their financials.

Revenue is in Korean Won in billions. From the above chart, it could be observed that revenue is flattish over the last 5 years.

The above screenshot shows the …