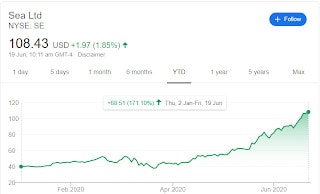 I recently read an article in TheEdge talking about how the company with the largest market cap in Singapore is not DBS. Instead, it has been replaced with SEA Ltd which is listed on the New York Stock Exchange. Sea has taken over the mantle of most valuable publicly-traded Singaporean company from DBS which has held it since taking over from Singtel in 2017.

As shown in the figure above, the share price of Sea is currently up 171.1% YTD while DBS is down 19%. According to TheEdge, Sea already overtook DBS in May and the gap between Sea and DBS has widened ever since with Sea being worth $10bn more than DBS based on market cap in mid-June. Interestingly Sea has yet to turn a profit while DBS made $1.2bn in the most recent quarter.

From an economic standpoint, DBS is a key pillar of the Singaporean economy