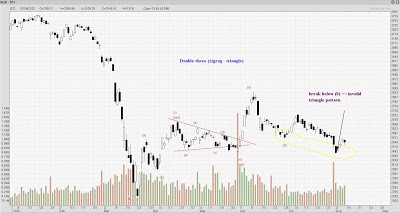 Continued from STI Analysis — the next peak and trough (73)

STI-N
Thing starting to get a bit tricky in analyzing the wave count.  Firstly, the present wave count that STI is doing a double-three (zigzag-triangle) structure for Primary wave 4 entered an invalid situation.

As shown in the figure above, STI broke below wave (b) of the triangle in doing wave (c) making the triangle pattern invalid.  Thus, what is the wave count for STI now ?  There are 2 possibilities going forward.
Primary Wave 5 Ongoing

Primary wave 4 ended at 2839.39 on 9th Jun 2020 as indicates from the figure above.  Ongoing downtrend is the Primary wave 5 that is the last of the whole SuperCycle correction since 2015.  The Primary wave 5 should be a 5-wave down (impulse or diagonal) in the Intermediate degree.  Temporary, going to put Intermediate wave ((i)) at