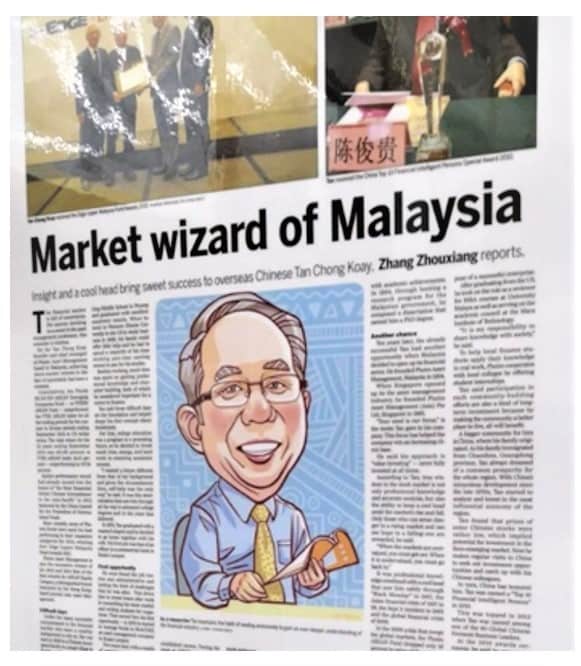 In his 43 years of investment experience, Dr Tan Chong Koay has earned many titles, including “Second Board King of Malaysia” (1998), “Southeast Asia’s Small-Cap King” (2006) and “Warren Buffett of Asia” (2017) [1]. His 18-year working life of helping others to build their businesses and his Asset Management firms, Pheim Asset Management Sdn Bhd in Malaysia [2] and Pheim Asset Management (Asia) Pte Ltd in Singapore [3] have won multiple awards. During his prime, his assets under management (AUM) once hit US$1.8billion [3].

In 2010, Dr Tan was awarded “China Top 10 Financial Intelligent Persons Special Award 2010” by People’s Republic of China. In 2012, he was awarded “Most Respected Chinese Entrepreneurship Award in Asia Pacific” by China Economic Trading Promotion Agency, People’s Republic of China. In 2014, Dr Tan was named one of the 80 Global Chinese Eminent Business Leaders by Beijing-based The China Daily. Many other accolades can be found here [6].

His book “Rising Above Financial Storms” has sold more than 14,000 copies.

2020 happened to belong to my zodiac, the Year of the Rat. Yes, I’m 35+? . Leaving my stable 6-figure per annum job as an engineer (it's really not too bad being an engineer) right after I bought my new car and amid the COVID-19 outbreak left many of my friends in disbelief. I got bombarded with many questions especially during the Lunar New Year gathering. Questions like “Don’t bluff, you received a better offer right?" Actually yes, I offered myself a job of spending more time with my family, to do what I love and to improve my wellbeing.