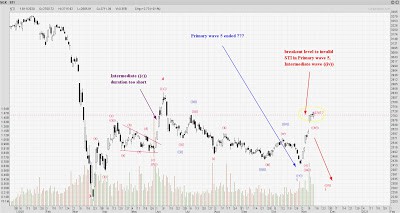 Continued from STI Analysis — the next peak and trough ? (79)

STI broke the 2707.67 level thereby invalidating the red label wave count as in the above chart.  So, does that mean the blue label stands and STI has finally bottomed for the correction since 2015, Primary wave 5, Cycle wave (C) and SuperCycle wave ((2)) completed ?  If true, whatever next is the SuperCycle wave ((3)) — another decade of market bull run !!!

Like everybody out there, do wish STI has finally completed the SuperCycle correction since 2015 BUT realized made a very BIG MISTAKE in the wave count meaning the above is not the correct one after all.  Admit the mistake being made as I don’t practice those notorious pride to wear white people in this nation that giving hindsight or other form of excuses for the mistake but lacking the courage to admit it.  Don’t admit a mistake mean you give up the chance to learn from mistake and improve.