The Fall and Rise of Disney 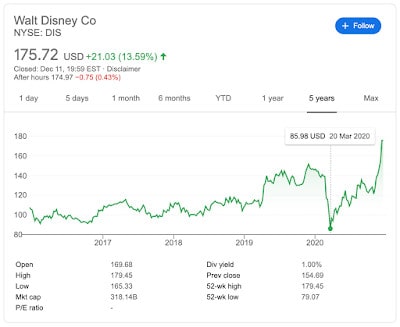 In March 2020, when the coronavirus hit US and everyone panicked, Disney was clobbered. Its theme parks suffered with catastrophic fall in revenue as visitors number collapsed. Its movie business was similarly hit as people stopped going to the cinemas. Share price fell from USD150 to USD85. This stock was labelled as the covid-hit name. Avoid it like the plague! Fast forward to December 2020, its share price hit USD175, an all time high. Its market cap at USD318bn is 1/3 bigger than Netflix and also Comcast, owner of Universal Studios. It has beaten Netflix at its own game with the spectacular success of Disney Plus, its newly launch streaming service. Disney now boasts c.100m subscribers across its various streaming services. While this is still smaller than Netflix’s 195m subs, Disney has far superior content and should catch up in time.  The Walt Disney Company (its official name) was