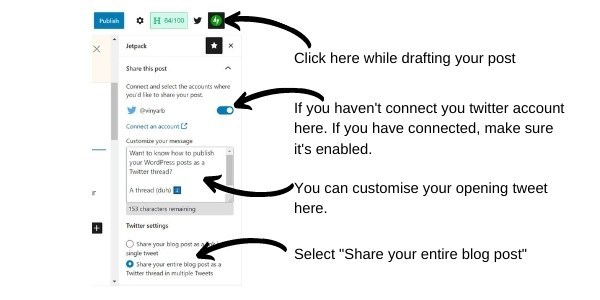 WordPress recently released a new feature with an integration with Twitter, allowing for entire blog posts to be simultaneously published on Twitter as a thread, or a tweetstorm. So naturally, this post will be both a tutorial on how to do it, as well as a test of it on my twitter account. Apparently, formatting, visuals and video will all be faithfully reproduced on Twitter, so it will be interesting to verify that. I’m testing this as I’m typing this, so… fingers crossed. I will also try to keep this short, since I don’t want the thread to be 100 tweets long.

div aria-hidden=”true” class=”wp-block-spacer”> The setup Basically, the integration will be done via the Jetpack dashboard. When you’re drafting your post, click on the Jetpack icon as shown in the picture below. You can also preview how it will look on Twitter before publishing your post, just