In last week, STI merely gain 2 points from the opening of 2986 and close higher at 2988. A white candle sticks with little upper/lower shadow affirms that investors are hesitant on the direction ahead.

In the coming week, a fifth of the S&P 500 will report earnings next week. On the economic front, there are March retail sales, industrial production, existing home sales and weekly jobless claims.

Europe will continue to stay in the headlines, as Spain issues bills Tuesday and longer-dated securities Thursday, and investors will watch to see if the auctions go better than Spain’s weak auction of several weeks ago.

STI index has closed slightly lower than the critical resistance at 3005 as investors are hesitant on the earning report ahead.

1) In weekly chart, a white candle sticks with short upper/lower shadow which indicates on the hesitant of … 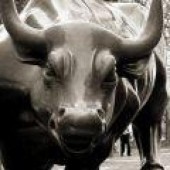